...And the Monkey Saga Continues

I witnessed a monkey attack in school today. Sarah and I were on the 3rd floor teaching art when a monkey came and sat on the ledge of the room. we were in between classes so it was only Sarah and I. We weren't looking at it because that's what you do.
Then, this little boy who is about 5 or 6 runs right up to it! Sarah tells him to be careful (in Hindi) and he says "I wont be attacked!" (in Hindi) and he kinda give the monkey this devious look. Next thing I know the monkey lunges for him, screeching. Then another monkey comes running towards him! The boy runs around the corner to try and get away. Everyone else screams and runs into their classrooms. I turn the corner to make sure the boy got away. As soon as I clear the corner I got a huge rush of adrenaline.
The boy was on the ground in the middle of the hallway with the two monkeys on top of him. He was screaming and thrashing. I start towards him to try and.....save him? fight off the monkeys? I didn't know. Thankfully, before I actually reach them, the monkeys run off. The boy gets up crying and clutching his leg. Images of a huge monkey bite flash through my mind, making me sick. How much of his flesh had been ripped away? I braced myself for the worst.  But I knew that no matter how terrible it was, I needed to get the kid out of the situation and to whatever medical attention he needed.
Thankfully, the worst of the damage was some scratches on his leg. I grabbed his hand, told him everything was going to be okay and lead him down to were the schools first aid kit is kept. On my way down one of the 7th grade boys charged up the stairs with a big stick. I assumed to fight off the monkeys.
Once we get downstairs I sit the boy down. He is still crying hysterically. I find Dettol and apply it to the scratches and put band aids on them. I also knew that this kid was gonna need a rabies shot, but we don't have anything like that at the school. Once the kid was taken care of I went back upstairs. There was now 3 or 4 boys with big sticks patrolling the area.
While I was bandaging the kid, the monkeys had gotten into my bag, taking out my umbrella and hand sanitizer. I got both of them back. The boy was sent home with a note saying that he needs a rabies shot. I hope his family follows through with it.
We decided it would be safer to pack up our makeshift art class and continue lessons in the classrooms. Once we get down there we realize we are missing all the pens that the kids use to draw! The monkeys had taken them. This was not good because we really don't have access to get any more. Thankfully, Sarah had a small stash hidden away. It wasn't until the end of the next class that we saw the pens on the ground outside the school. We were able to get most of them back.
I feel like I'm still a little in shock from the whole situation. No wonder the locals are scared of the monkeys. I think the little boy also learned a lesson. I doubt he'll be so arrogant around the monkeys again.
Oh India, I wonder what surprises you have for me next.
The villains... 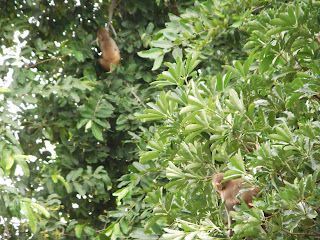 Hello! Welcome to my blog. I am so excited to be teaching English to children in India. If you'd like to donate, Click here.